What are interchange fees?

If you’d like an explanation of the card payment flows, please read this.

For merchant acquirers, interchange fees are the main cost incurred to process a card payment, and represent “income” for the card schemes in return for performing the authorisation, clearing and settlement services between acquirers and issuers. So interchange fees directly influence the fees that acquirers then charge their merchants.

On the other hand, issuers benefit from these interchange fees when they arise as a result of a merchant transaction because they receive a portion of these fees via the card schemes as “compensation” for issuing the card. Issuers also earn fee income directly from their cardholder by charging participation fees, account fees and interest on revolving credit facilities.

This fee flow is illustrated below: 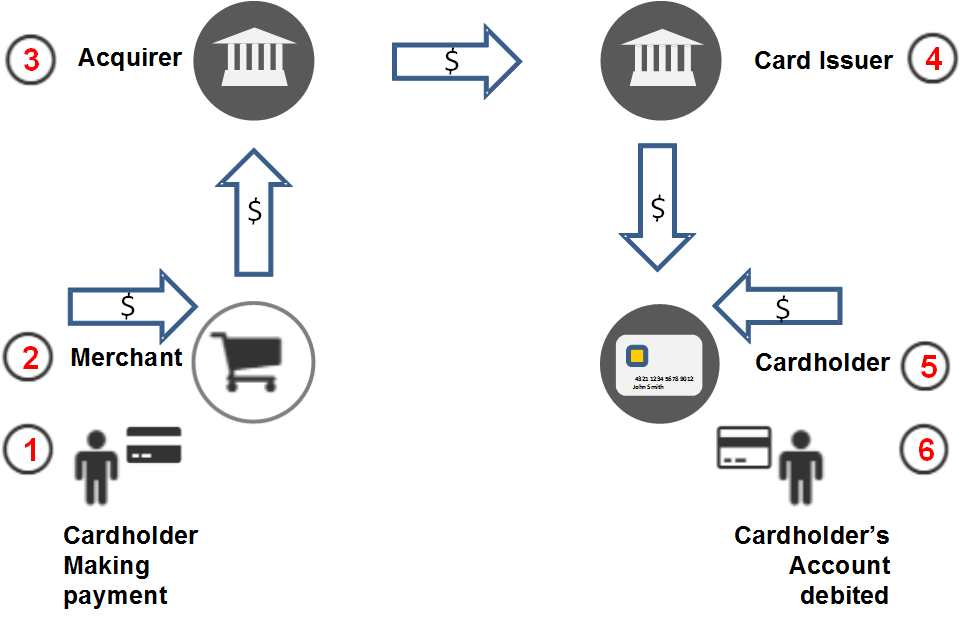 (For withdrawals performed at ATMs, the interchange fee flow typically flows in the opposite direction from issuer to acquirer. In this case, they are an important source of fee income for ATM deployers to fund the cost of deploying and servicing an ATM network).

What kind of interchange fees are there?

This depends on the card scheme, as they each have their own classification. Even within each card scheme, the number, type and amount of interchange fees can vary from country to country, by how the card is accepted, by the actual card type and the relative locations of the merchant and the card issuer! Visa and MasterCard interchange fees are the most complicated and are very challenging for acquirers and issuers to administer, whereas other card schemes have much simpler arrangements (such as UnionPay, for example, which typically has a single, flat interchange fee that applies on every transaction).

For outsiders, understanding interchange fees is a black art. Part of the issue is that in many regions, outsiders have no visibility of card scheme interchange because acquirers and issuers are prevented by the card schemes from disclosing interchange fees. But even for insiders who may have access to scheme documentation, the sheer number and variety of interchange classes can be overwhelming.

Luckily, for this post I can freely illustrate some interchange fee examples that apply on domestic cards issued in Australia, where the Reserve Bank of Australia has “designated” both Visa and MasterCard brands and compelled them to disclose domestic interchange fees.

Let’s have a closer look at some Australian Visa interchange fees for “credit” transactions (correct as of the date of this post): 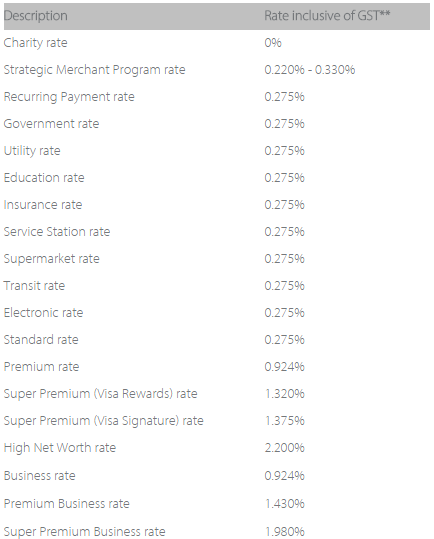 We can see that there is a rate that now applies across a number of classes and is the same as the “standard” and “electronic” rate which basically refers to “card not present” and “card present” acceptance method respectively. (Previously, these classes typically had different rates, so Visa Australia has simplified this somewhat in recent years).

It’s also apparent that business and/or premium cards attract a higher interchange fee. The rationale for this is that the card issuers are providing enhanced reporting and other services to the card holders and therefore need more interchange fee income to compensate them. The card schemes are also benefiting, although clearly acquirers and their merchants are essentially funding this extra cost.

Here are some Australian MasterCard interchange fees for “credit” transactions (correct as of the date of this post):

Like Visa, MasterCard has a plethora of interchange classifications, with the rates increasing for business and premium card types. It’s interesting to note that, as of writing, the standard Visa rate is lower than the standard MasterCard rate. It often seems that both Visa and MasterCard tend to have similar interchange fee rates, and that when a variance arises, it usually diminishes reasonably quickly! So we’ll see whether this happens for domestic Australian interchange fees in future.

Let’s have a look at Visa Australia’s debit interchange fees: 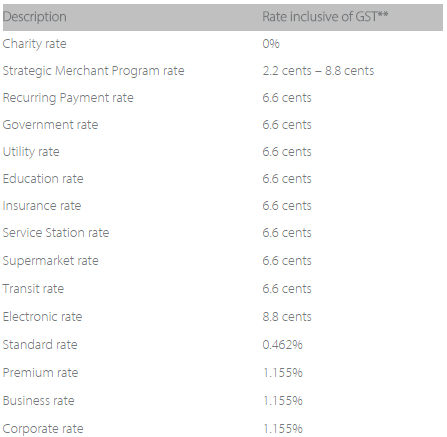 The first thing we notice is that debit interchange is mostly expressed in “cents per transaction”, rather than as a percentage of transaction value (except for the business and premium categories which is still charged on a percentage basis).

So the value of debit transactions largely doesn’t affect the interchange fee income for the card schemes. It’s purely the volume (or number) of transactions which is relevant. There are still a number of classifications though, and acquirers and issuers need to be able to administer all of these classifications. 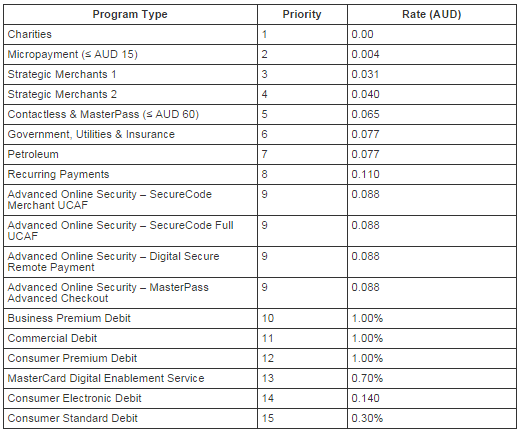 And like Visa, it’s mostly “cents per transaction” except for the business and premium classifications.

These days, many acquirers are charging merchant fees based on a “cost-plus” arrangement. Cost-plus merchant fees are charged as a margin above cost, where cost is typically the interchange fee applying on an individual transaction. Sometimes, the acquirer will also include other card scheme costs that they typically incur to process a card payment too. Sometimes, they just use the interchange as the cost component, and basically factor all of the other costs into the “margin”.

Let’s look at an example. Let’s say that the acquirer is charging a cost-plus merchant fee of 0.20% above interchange. If the card payment involves a domestic Visa card making an ordinary card payment at a payment terminal, then the merchant would be charged the interchange (AU$0.275) plus the margin (AU$0.20) equals AU$0.475 for the transaction.

It’s pretty obvious that if the card type involves a different interchange classification on the very next transaction, then the merchant fee will be different. This creates havoc for the merchant because they now have to reconcile on a per transaction basis if they are to understand their merchant fees down to the atomic level. But it also allows the acquirer to ensure that they earn a set profit margin above interchange each and every time.

Previously, acquirers were charging merchant fees on a “blended” basis. This meant that they had to estimate the likely card mix and associated interchange cost, work out an average interchange cost, then apply their margin above that in order to come up with a single merchant fee percentage. Most acquirers were pretty rubbish at estimating this, and so would often incur more cost than they had anticipated. If they got it particularly wrong, they’d lose money.

This explains why many acquirers have moved to a cost-plus pricing model. Certainly this is true in Europe and Australia, for example, although somewhat less prevalent in Asia and North America. But given the complexity of Visa and MasterCard interchange, it’s likely to become more prevalent in regions where it’s not currently.

Acquirers who can successfully pass on the “risk” associated with the complexity of interchange fees to their merchants and maintain target profit margins will be much better able to manage their acquiring business. Merchants should then make sure that their acquirers provide them with good reporting to show how the merchant fee is derived, ideally on a per transaction basis.